The Hare And The Tortoise Story Writing In English 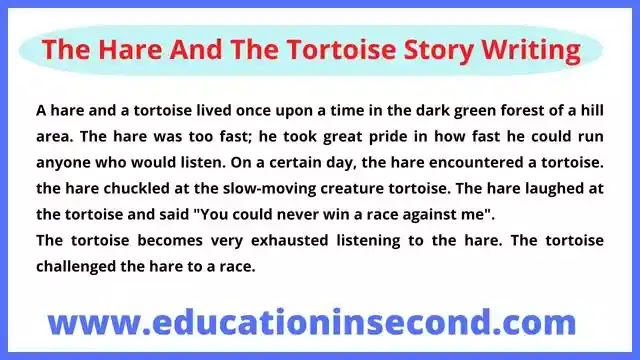 The Hare And The Tortoise Story Writing

A hare and a tortoise lived once upon a time in the dark green forest of a hill area. The hare was too fast; he took great pride in how fast he could run anyone who would listen.

On a certain day, the hare encountered a tortoise. the hare chuckled at the slow-moving creature tortoise. The hare laughed at the tortoise and said "You could never win a race against me".

The tortoise becomes very exhausted listening to the hare. The tortoise challenged the hare to a race.

The hare accepted the challenge and decided to take part in the race. The hare was very confident about his skills and abilities. He was sure that he was going to win the race.

On the race day, the hare passed the tortoise very soon and went too ahead to the finishing point. The hare feeling assured about his victory, stopped under a tree to take a nap.

When the hare woke up and saw the victory of the tortoise, he was very surprised. He understands the importance of hard work and determination. After that, the hare learned to be humble and great at his talent. On the other hand, the tortoise learned about self-belief and consistent work towards achieving the goal.

Both of them learned a valuable life lesson from the race, and they started living happily together.

Moral of the story The Hare And The Tortoise Story Writing

The moral of this story signifies that it is better to go slow and steady toward the goal rather than rush and make mistakes.

The Fox And The Grapes Story Writing