This is just a sample report writing on a train accident that provides us with a brief idea of how to write a report on any accidental event. The main rule for writing a good report is to have a detailed mental outline of the situation, such as when and where the accident occurred, the cause of the accident injuries, rescue operation, and lastly don't forget to write a conclusion. If possible, give a solution to the problem at the conclusion, like how we can prevent such tragic incidents in the future.

I hope you enjoy this post on reporting writing on train accidents. You can reach out to me through the contact form. Thank you. 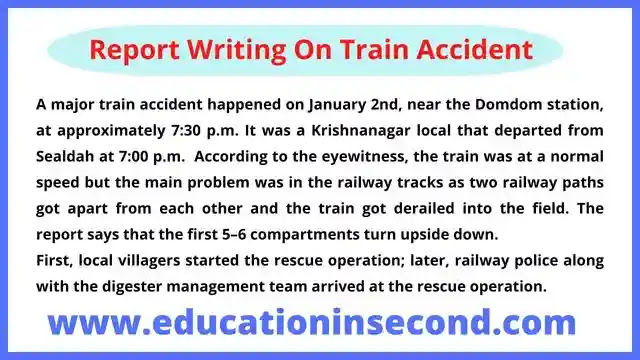 200 People Were Injured In a Major Train Accident.

A major train accident happened on January 2nd, near the Domdom station, at approximately 7:30 p.m. It was a Krishnanagar local that departed from Sealdah at 7:00 p.m.

According to the eyewitness, the train was at a normal speed but the main problem was in the railway tracks as two railway paths got apart from each other and the train got derailed into the field. The report says that the first 5–6 compartments turn upside down.

First, local villagers started the rescue operation; later, railway police along with the digester management team arrived at the rescue operation. They rescue people starting from kids to old aged people and they turn them out. Our railway minister, along with some state ministers, went to the accident site to learn more about the casualty. The minister also announced compensation for the injured family.

The initial report says that there were approximately 900 passengers on the train, and 200 people got injured. 50 people have been admitted to the local hospital with injuries to their legs and heads. Fortunately, no one has died as of yet.

The cause of the accident is currently under investigation. A full report will be released this week. The railway authority informed the press meeting that there was no fault on the part of the driver and that the accident was caused by a rail track issue. Now, the authority is investing in determining why two railway paths diverge.

To overcome this type of tragic incident in the future, the authorities must take the necessary steps, like maintaining the railway tracks from time to time to ensure that all the systems are in proper condition.