Independence day is a ceremony that is celebrated by all the countrymen with great enthusiasm. Independence day raises the patriotic spirit in self. Report writing on Independence Day celebrations describes how a school celebrates independence through a variety of colorful cultural events. 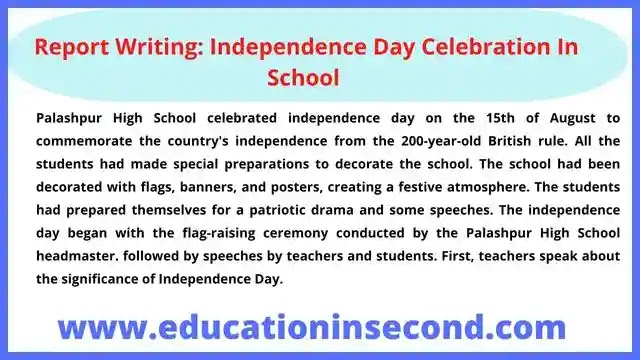 Report writing on independence day celebration is written on the based of following points:

Palashpur High School celebrated independence day on the 15th of August to commemorate the country's independence from the 200-year-old British rule.

All the students had made special preparations to decorate the school. The school had been decorated with flags, banners, and posters, creating a festive atmosphere. The students had prepared themselves for a patriotic drama and some speeches.

The independence day began with the flag-raising ceremony conducted by the Palashpur High School headmaster. followed by speeches by teachers and students. First, teachers speak about the significance of Independence Day. They pointed out all the struggles and sacrifices that our great freedom fighters made to get independence from British rule.

Later in the event, a patriotic drama was performed by the students, sketching the context of the situation of a farmer under British rule.

All the cultural programs, including dance, and patriotic drama songs, were very well received by the audience.

Students from all the classes actively took part in the event and made it a grand success.

Overall, the independence day celebration at Palashpur High School was very colorful. It was a great opportunity for students to show their patriotic spirit and pay tribute to our great freedom fighters.