Essay On Republic Day In English

Republic day is a traditional celebration that reminds the pride of our country and the struggle of our freedom fighters. the Indian constitution gives the fundamental rights of countrymen it is a very important day for everyone. Essay On Republic Day tells us about the history, celebration process, and significance of the republic day. 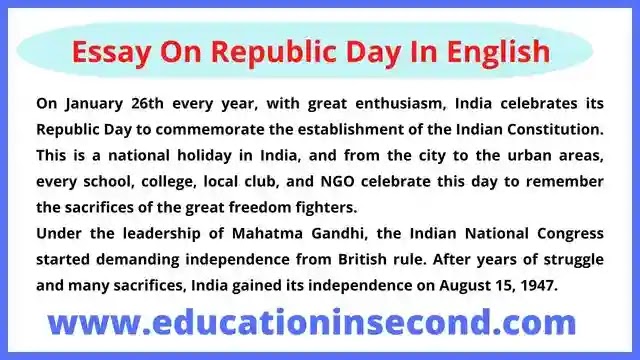 Essay On Republic Day is written based on the following points:

Essay On Republic Day In English

On January 26th every year, with great enthusiasm, India celebrates its Republic Day to commemorate the establishment of the Indian Constitution. This is a national holiday in India, and from the city to the urban areas, every school, college, local club, and NGO celebrate this day to remember the sacrifices of the great freedom fighters.

Under the leadership of Mahatma Gandhi, the Indian National Congress started demanding independence from British rule. After years of struggle and many sacrifices, India gained its independence on August 15, 1947. However, the country did not have a written constitution at that time. On January 26, 1950, India adopted its constitution and became a republic.

The celebration of Republic Day is very colorful. All over the country, India celebrates this day by hoisting flags. The main event takes place in the capital of the country, where a grand parade is arranged to show the power of Indian forces. The air force displays its capabilities through different activities in the sky. The parade also includes a section where tableaus are displayed; each tableau represents a state or a culture.

The Prime Minister of India addresses the nation, sharing the vision for the country's growth. The ceremony is attended by dignitaries from all over the world.

The significance of Republic Day to a countryman is beyond just a holiday. This day reminds us about the struggle and the sacrifices of our freedom fighters. It also reminds us of the democratic values and fundamental principles of every countryman. Undoubtedly, Republic Day brings the country's people together, regardless of language, religion, or culture.

In conclusion, our constitution gives us fundamental rights, so it is very important that we all come together to celebrate this day and remember the sacrifices of freedom fighters.