The Oak And The Willow Story Writing In English

Write a story with the following points given below. The title of the story is "The Oak And The Willow Story Writing".  After composing the story, you have to choose a suitable moral for it. When writing the moral, you have to be clear about the main idea of the story. The moral should represent the concept of the story. 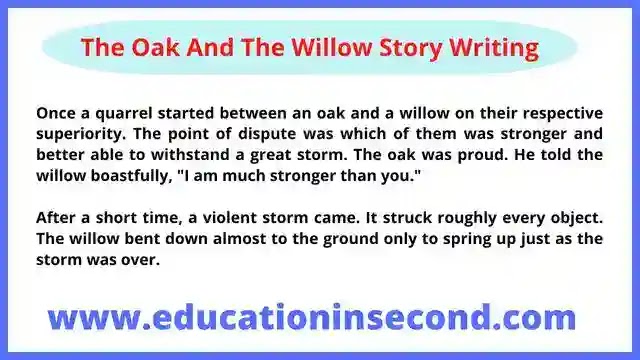 Points : Quarrel between an oak tree and a willow tree - which was stronger - the oak was proud and belittled the willow - the willow waited for the next storm - a terrible storm came the willow remained - the oak was uprooted.

The Oak And The Willow Story Writing

Once a quarrel started between an oak and a willow on their respective superiority. The point of dispute was which of them was stronger and better able to withstand a great storm. The oak was proud. He told the willow boastfully, "I am much stronger than you."

After a short time, a violent storm came. It struck roughly every object. The willow bent down almost to the ground only to spring up just as the storm was over.

Moral: Pride goes before a fall.