Home Story writing The Dog In The Manger Story Writing

The Dog In The Manger Story Writing 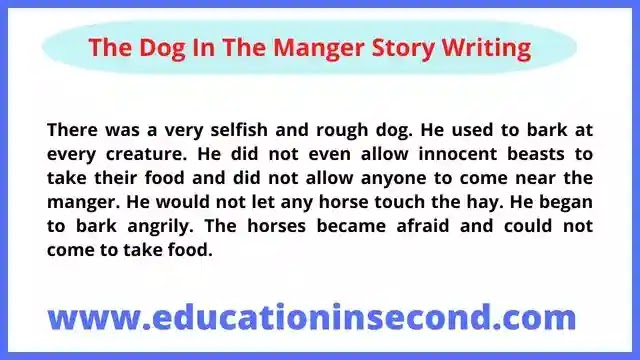 Points: A rude and selfish dog - got into the manger - lay down there - refused the horses to come near - could not eat hay, but kept the hungry horses away - moral.

The Dog In The Manger

There was a very selfish and rough dog. He used to bark at every creature. He did not even allow innocent beasts to take their food and did not allow anyone to come near the manger. He would not let any horse touch the hay. He began to bark angrily. The horses became afraid and could not come to take food.

Thus, the bad-tempered dog kept the hungry horses away from their food. He himself could not eat the hay. Yet, he would not allow anyone to take a bit of it. He did not follow the noble principle, "Live and let live."

The Clever Fox And The Foolish Goat Story Writing

A Farmer and his Horse Story Writing

Tags:
story of dog in the manger Story writing
Share: