The Clever Fox And The Foolish Goat Story Writing

Story writing is a form of writing asked in the examination where you are asked to compose a story based on some given points. Here the story is about a clever fox and a foolish goat and how a fox uses his satanic intelligence to fool a goat. After composing your story, you have to write an appropriate moral for your story that represents the main message of the story. 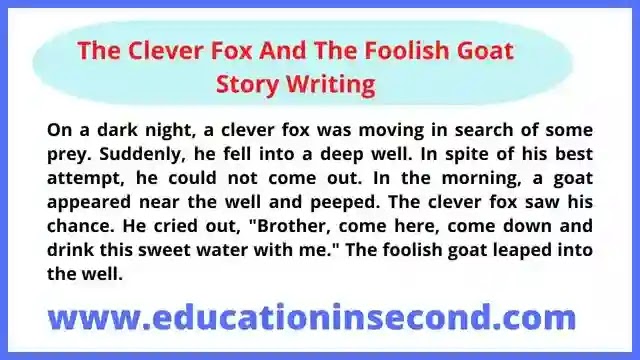 Hints: A fox fell into a well - could not come out - peeped a passing goat - the fox invited him to taste the sweet water - goat leaped in - fox leaped upon his horns and jumped out at left in the well.

The Clever Fox And The Foolish Goat

On a dark night, a clever fox was moving in search of some prey. Suddenly, he fell into a deep well. In spite of his best attempt, he could not come out.

In the morning, a goat appeared near the well and peeped. The clever fox saw his chance. He cried out, "Brother, come here, come down and drink this sweet water with me." The foolish goat leaped into the well. The clever fox quickly mounted on the horns of the goat. He stood quite high. He could jump out of the well then. The foolish goat alone remained in the well in utter helplessness.