Points: Date and place of birth: 1931, Rameswaram in Tamil Nadu-Parents: Jainulabdeen, a pious muslim and Ashiamma-Education: School of Rameshwaram; Madras Institute of Technology, 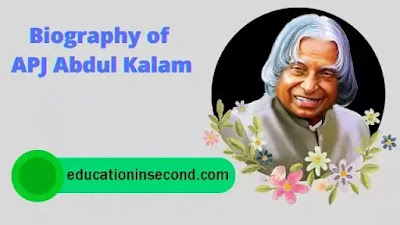 Avul Pakir Jainulabdeen Abdul Kalam, the great scientist and one of the finest men of modern India, was a 'ratna', a jewel of India. He was popularly called the 'Missile Man'. As the eleventh president of India, he won the hearts of the people. He was the people's president.

He was born in Rameswaram, Tamilnadu on 15th October, 1931. His father Jainulabdeen was a pious person and mother Ashiamma was a homemaker. His early education started in a school at Rameswaram. Then he was admitted to Madras Institute of Technology. He played a key role in India's first-ever rocket launching in 1965. He was the leader of the nuclear explosion experiment at Pokhran in 1988. He guided the launching of the surface to surface missiles 'Trisul', 'Akash' and 'Agni'.

He received the ‘Padma Bhusan' and the 'Bharat Ratna', the highest civilian award in India. He wrote many books including 'Wings of Fire', his autobiography. He left his mortal body on 27 July, 2015. But his ideal will surely guide us towards his dream destination - India as a knowledge super power.

1. "Thinking should become your capital asset, no matter whatever ups and downs you come across in your life."

4.  "If you fail, never give up because FAIL means First Attempt In Learning."

5.  "In this world, fear has no place. Only strength respects strength."