Unseen Passage With Question and Answer 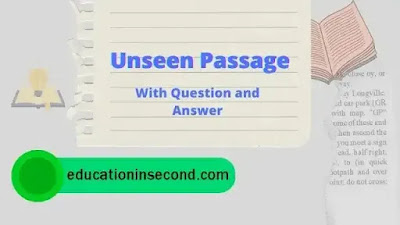 Kolkata: It may be time to rewrite history textbooks. Scientists from IIT Kharagpur and Archaeological Survey of India (ASI) have uncovered evidence that the Indus Valley Civilization is at least 8,000 years old, and not 5,500 years old, taking root well before the Egyptian (7000 BC to 3000 BC) and Mesopotamian (6500 BC to 3100 BC) civilizations. What's more, the researchers have found evidence of a pre-Harappan civilization that existed for at least 1,000 years before this.

The discovery, published in the prestigious 'Nature' journal on May 25, may force a global rethink on the timelines of the so-called 'cradles of civilization'. The scientists believe they also know why the civilization ended about 3,000 years ago climate change.

“We have recovered perhaps the oldest pottery from the civilization. We used a technique called 'optically stimulated luminescence' to date pottery shards of the Early Mature Harappan time to nearly 6,000 years ago and the cultural levels of pre Harappan Hakra phase as far back as 8,000 years," said Anindya Sarkar, head of the department of geology and geophysics at IIT-Kharagpur.

The team had actually set out to prove that the civilization proliferated to other Indian sites like Bhirrana and Rakhigarrhi in Haryana, apart from the known locations of Harappa and Mohenjo Daro in Pakistan and Lothal, Dholavira and Kalibangan in India. They took their dig to an unexplored site, Bhirrana-and ended up unearthing something much bigger. The excavation also yielded large quantities of animal remains like bones, teeth, horn cores of cow, goat, deer and antelope, which were put through Carbon 14 analysis to decipher antiquity and the climatic conditions in which the civilization flourished, said Arati Deshpande Mukherjee of Deccan College, which helped analyse the findings along with Physical Research Laboratory, Ahmedabad.

The researchers believe that the Indus Valley Civilization spread over a vast expanse of India-stretching to the banks of the now "lost" Saraswati river or the Ghaggar-Hakra river-but this has not been studied enough because what we know so far is based on British  excavations. “At the excavation sites, we saw preservation of all cultural levels right from the pre-Indus Valley Civilization phase (9000-8000 BC) through what we have categorised as Early Harappan (8000-7000 BC) to the Mature Harappan times,” said Sarkar.

While the earlier phases were represented by pastoral and early village farming communities, the mature Harappan settlements were highly urbanised with organised cities, and a much developed material and craft culture. They also had regular trade with Arabia and Mesopotamia. The Late Harappan phase witnessed large-scale de-urbanisation, drop in population, abandonment of established settlements, lack of basic amenities, violence and even the disappearance of the Harappan script, the researchers say. [adapted from The Times of India, 29 May, 2016]

Choose the correct answer from the given alternatives :

1. The Indus Valley Civilization ended about

2. The news about the newly discovered timeline of the Indus Valley Civilization was first published in

3. According to the new discovery, the oldest civilization of the world is -

4. The mature Harappan settlements were

6. The people of the Harappan Civilization had trade links with

Write 'T' for true and 'F' for false. Provide supporting statements for your answer:

1. The main reason for the end of the Harappan Civilization was climate change.

2. Anindya Sarkar is the head of the department of Geology and Geography at Deccan College.

Supporting Statement: The scientists believe they also know why the civilization ended about 3000 years ago-climate change.

Supporting Statement: ... Anindya Sarkar, head of the department of geology and geophysics at IIT, Kharagpur.

1. In which areas did the Indus Valley Civilization spread?

Ans. The Indus Valley Civilization spread over the banks of the Saraswati river or the Ghaggar-Hakra river. It spread in Lothal, Dholavira and Kalibangan in India and Harappa and Mahenjo Daro in Pakistan.

2. What is the difference between the early phases of Harappan Civilization and the mature Harappan settlements?

Ans. The early phases were pastoral and rural in nature whereas the mature settlements were highly urbanised.

3. What do the scientists believe about the cause for the end of the Indus Valley Civilization?

Ans. The scientists believe that the Indus Valley Civilization ended about 3,000 years ago due to climate change.

Tick the most appropriate title for the passage:

2. Indus Valley Civilization : Much Older Than Though

3. A New Discovery of Science

2. Indus Valley Civilization : Much Older Than Though

Given below are the meanings of four words which you will find in the given passage. Find out words and write them in appropriate boxes on the right hand side:

1. facts or observations presented in support of an assertion

4. things or circumstances that makes life a little easier or more pleasant.