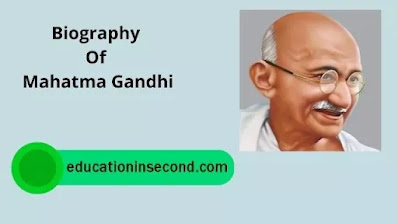 Education: at Porbandar and Rajkot, left for England in 1988 to study law -

Professional career: Back to India in 1893, started practicing at the Bombay

Mahatma Gandhi Many great Indians left their mark on the Indian Freedom Movement by their tireless struggle. Mohandas Karamchand Gandhi is one of them. He was born on 2nd October, 1869 at Porbandar, Gujarat. Kaba Gandhi and Putli Bai were his parents. His school education was at Porbandar and Rajkot. Then he went to England in 1888 to study law. He came back to India in 1893 and started practising in the Bombay High Court. Being unsuccessful here as a lawyer, he went to South Africa to practise law. This great leader started his career in India's freedom movement here through passive resistance and non-violence in protest against the tortures on black people.

Later he joined the Indian National Congress. Gandhiji led the Indian struggle for freedom in 1920 when he started Non-Cooperation Movement and in 1930 he organised Civil Disobedience Movement. He led a simple life and disliked power and position. India won her freedom on 15th August 1947 but Gandhiji was assasinated by Nathuram Godse on 30th January 1948. Rabindranath called him 'Mahatma' and the Indians respectfully call him the 'Father of the Nation'.

This Question may be also asked as :