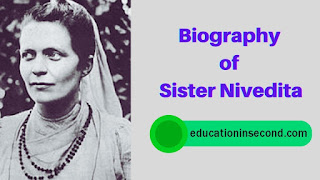 Sister Nivedita Sister Nivedita whose actual name was Margaret Elizabeth Noble was born at Dunganon in Ireland on 28th October, 1867. Samuel Richard Noble was her father. Her mother Mary Isabel Hamilton, was a pious lady. Margaret completed her education and took vocational training.

Finally in 1897 she met Vivekananda in London and was moved by his speech and noble mission. She became the disciple of Swamiji and came to India. Swamiji gave her the name Sister Nivedita. She truly became the sister of the distressed people of the Indian subcontinent. She assisted Swamiji in serving the victims of plague day and night. She was an active member of 'Anushilan Samity'. She always encouraged the freedom fighters of India and urged for an independent India. This noble lady died on October 13, 1911, after dedicating her whole life to the service of the common people.