Who will bell the cat ? Story writing | Moral : It is easier said than done

Who will bell the cat ? 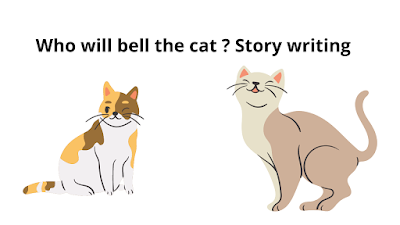 Points: Mice want to get rid of a cat-several plans and proposals were made--one proposes to tie a bell round the cat's neck—an elderly mouse asked : Who will bell the cat ?

Once there was a big house in a certain town. The family which lived in that house was a prosperous one. There were many rooms including a store-room which was stuffed with food-grains and other things of necessity. Naturally, mice arrived at the house one by one and in a short period of time the house was infested with hundreds of mice. They lived there very happily as there was no lack of food. Every night the mice would make a mess in all the rooms as soon as the family members went to sleep putting out the lights. They destroyed food items, clothes, beds, important papers etc. besides disturbing the sleep of the family. To get rid of the mice the owner of the house brought a stout cat one day, finding no other way. No sooner did the cat come than it started its job. It strolled through the rooms every night and killed a lot of mice. In a few days the number of the mice decreased rapidly. The family members were very pleased with the cat. They took good care of it and fed it with a lot of food of its choice. This caused a panic among the mice. They could no longer move freely as before. They could not even come out of their holes. As a result they had to starve. In this moment of crisis they held a meeting to discuss how to get rid of the danger in the form of the cat. Several plans and proposals were made in the meeting but none of them seemed to be suitable. At last a young mouse stood up and said, “'I have a good plan. It is to tie a bell round the cat's neck. Whenever the cat will move, the bell will ring and we shall easily hide ourselves in time.” All the mice readily accepted the idea. An old mouse had so long been silent. Now it rose and said gravely, “It is a good idea indeed. But who will bell the cat ?'' At this all the mice kept quiet. They remained where they were.

• Moral : It is easier said than done.