Two Friends and the Bear 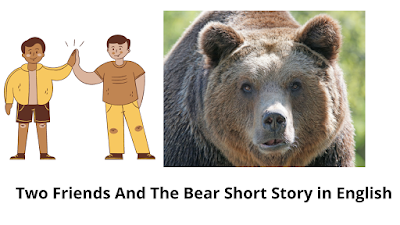 Once upon a time two boys lived in a certain village in India. They were friends from childhood. They always remained together, played together, went to various places together. One day they decided to visit a fair which was being held in a distant village. So they started for that village in the morning. They had to cross a dense forest to reach the fair ground. When they were walking through the forest, suddenly they could hear the roar of a wild bear. Sensing danger one of the friends proposed, “Let's climb on to that tall tree. Then the bear will not be able to catch us. We will be safe.” Then the other boy said, “But I never climbed a tree before. I don't know how to climb one. We have to think of any other plan.” Then the first friend harshly said, “But I know how to climb up a tree. I can't endanger my life for your sake. I can't wait any longer here for the bear to come any moment. You stand here and keep planning. I am going.” Saying that he quickly climbed on to a nearby tall tree. The second friend remained alone on the ground. He was very frightened. He could not think how to save himself from the wild bear which appeared at a distance. Then he thought out a plan. He fell flat on the ground holding his breath tight. He knew that bears do not touch a dead person.

After some time the bear reached the place where the boy was lying. It came near him, smelt all over him and took him for dead. The bear left the place after a few moments. Then the boy on the ground got up realizing himself safe. The boy on the tree also came down. He asked his friend, “What did the bear tell you? I found it whispering something into your ear.” The second friend curtly replied, in bear advised me to keep away from false friends." Without saying anything more he started walking towards their own village.