The Sea-robbers and the Good Man 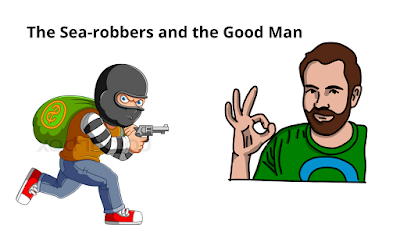 Long, long ago there lived a man in a rocky island. He had a philanthropic urge from his boyhood. He always wanted to do something helpful for his fellow beings. One day, an idea occurred into his mind, that he thought might save many lives from the clutch of death. There was a submerged hill in the sea near the island where the philanthropic man lived. It could not be seen by the mariners from a distance as it remained under water. So almost every day ships collided with the hill and sank with the people and goods on board. A lot of innocent lives was lost every year. But it was an important route for the ships and so it could not be avoided completely. The good man was very unhappy about this matter. He always thought how to save the lives of the people from that hill. But he could not find out any way for a long time. Suddenly that idea occurred to him. He collected a big bell and hung it on a rock near the sea. The bell swang in the strong wind of the sea and continued to ring all the day and night. Thus it began to warn the mariners of the submerged hill. The news of this act spread through the world and when the mariners heard the ringing of the bell they were alert and were saved from fatal accidents. Everybody praised this act of doing something for mankind. But it is the norm of this world that the wicked always convert something good into evil. So, the sea-robbers who plundered the ships that plied through the sea in that area became jealous. They cut the rope of the big bell and destroyed it at once. They gathered satisfaction from the thought that this act of them would lead the mariners into trouble. But soon justice fell upon them. After some days when the ship of the robbers was running at an enormous speed, it suddenly collided with the hill and was smashed. So, all the robbers were drowned and died.