The Benevolence of Napoleon or Napoleon and the English Sailor

Points: England at war with France - a young English sailor was made a prisoner-longed to see his mother-got a chance of escaping and reaching the coast of France-saw on empty cask come floating-stealthily made out of it a boat to cross over to England about to launch the boat into the stormy channel-caught and brought before Napoleon-Napoleon moved by his love for his mother-offered him a purse of gold-sent him back to England. 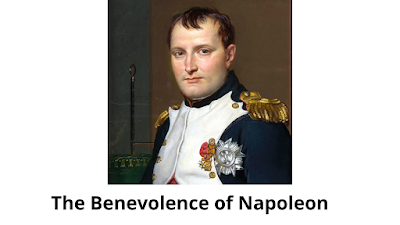 In the past many a battle were fought between England and France. The two countries are separated by the English Channel. They attacked each other several times to expand their kingdoms. In such a battle during the reign of Napoleon Bonaparte, the emperor of France, an English sailor was caught by the enemy soldiers and was made prisoner. In captivity he had to work very hard all day. At night he thought only of his mother who lived alone in England. In the dark cell of the prison he passed a long time and during this period he did not forget his mother for a single day. He eagerly longed to see his aged mother all through the years. He always tried to find scope of escaping. Chance came to him at last after a long time. Utilizing the chance he fled from the prison one night and reached the coast of France running all through the night. There he took shelter in a cave and remained hidden during the day. At night he tried to find a means to cross the turbulent English Channel but in vain. Some days passed in that way. Every night he came out of the cave and walked along the coast in search of a boat. One day he found an empty cask floating near the shore by chance. He brought it into the cave and stealthily made a boat out of it after some days' effort. He was very excited and anxious to start his voyage towards his motherland. But as he was about to launch his boat one night into the stormy channel he was caught by the French soldiers. Then he was brought before Napoleon, the mighty ruler of France. “What inspires you to risk your life in this way?" asked Napoleon. The young sailor replied, “I wish to see my aged and infirm mother whom I have not seen for a long time. She is all alone there." Napoleon was profoundly moved by the young man's love for his mother. So, he offered him a purse of gold and immediately sent him back to England.

• Moral : Benevolence is better than force.

Tags:
Story writing The Benevolence of Napoleon or Napoleon and the English Sailor
Share: