The Ant And The Dove Story Writing

The Ant and the Dove 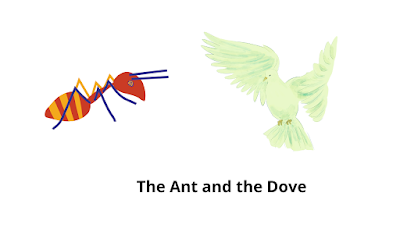 In a forest a small stream flowed through the trees. A tree stood just beside the stream and some of its branches were hanging over the water. One day, an ant was running quickly along such a branch of the tree in search of food. In a haste the ant's legs slipped and it fell into the stream. Though the stream was small, the water was flowing at a high speed. The ant tried hard but could not get back to the shore. It struggled against the current of water for a long time. It was repeatedly being carried away by the water. At that time a dove was sitting on another branch of the tree. It suddenly noticed the ant struggling in the water. It took pity on the poor ant. It resolved to save the ant's life. So, it tore a small twig off the tree with its beak and dropped it on to the water where the ant was struggling. The ant soon climbed on to the twig which came near the shore flowing with the ant. Thus the ant's life was saved. The grateful ant muttered within himself, “Thank you dove.” A week or so had passed from that incident. One day the ant suddenly noticed a hunter who was aiming his gun at a bird sitting on a tree. Watching carefully the ant found that it was the same dove that saved its life. The ant thought, “Now I must repay what the generous bird did for me.” Wasting no time the ant reached the spot where the hunter stood. It gave a sharp bite on one foot of the hunter just when he was going to pull the trigger of the gun. He startled in pain and missed the target. Thus the bird's life was saved. It immediately flew away sensing the danger.

• Moral : A little help can be of great use.