A Merchant in a Forest 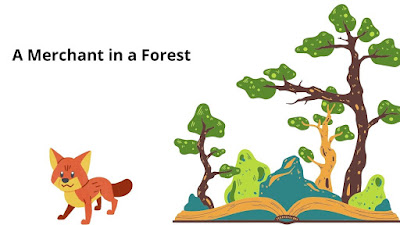 Long long ago there lived a rich merchant in a big town. He had a lot of riches. One day he was passing through a forest to reach another town for business purpose. He had a bag full of gold with him. He had two guards with him. Suddenly, when he was in deep forest, the sky began to be shrouded with dark cloud. Lightning began to spark.

Ultimately, cloud broke into heavy rain. The merchant suddenly fell into great danger. There was nowhere to take shelter to save himself from this tremendous rain and lightning. At last, he stood under a big tree but was drenched throughout with his bag full of gold. Being drenched throughout the merchant blamed God for some time and then proceeded for his destination. After walking some distance, suddenly he heard the sound of approaching foot steps.

He looked forward in eagerness and what he saw was simply terrible. Some robbers were coming towards him. The guards fled immediately leaving him alone. The merchant had nothing to do against the gang of terrible robbers. They came close to him and wanted to snatch the bag full of gold by aiming their guns. The merchant tried to resist them with all his might. So the robbers got angry and shot him. But fortunately, the gunpowder of the cartridges got wet at the heavy rain. As a consequence, the guns did not go off. So, the merchant was saved at last.

• Moral : There lies some amount of goodness in every act of God.

The Sea-robbers and the Good Man Story Writing

Tags:
Story writing Story Writing on A Merchant in a Forest
Share: