A Competition among Three Artists 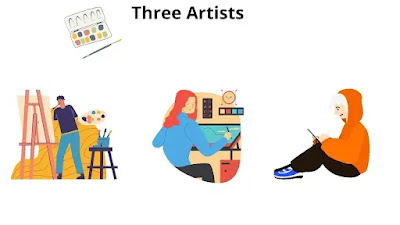 Once upon a time three great artists lived in a certain kingdom. All of them were renowned for their perfection in painting. They could draw life-like pictures. All the three had a lot of admirers among the common people. There was a dispute among the people about who the greatest among the three was. Respective supporters of the artists claimed each one to be the greatest. The ruler of the kingdom also was no sure about it. So, a competition was arranged to determine who the greatest artist was.

On the scheduled day, the three artists appeared at the arena. A lot of enthusiastic spectators also gathered to watch the competition. The three artists tried their best express their artistic excellence. After they had finished drawing their respective objects those were uncovered for the judgement. Some noble men of the kingdom were the judges.

The first artist painted a bunch of red roses. It looked so original that it the bees came there and tried to sit on the roses. The judges were very impressed with the painting. The second artist drew a bunch of ripe grapes. An ox which appeared there by chance tried to eat the grapes as they looked exactly like real grapes hanging from the vine. The judges were stunned, Then they came in front of the third artist's work. They found it covered with a curtain. So, they tried to draw the curtain aside. But to their utter astonishment they found that the curtain itself was the very work of art of the third artist. All the people gathered there were also highly amazed. The first artist could befool some insects. The second could befool an animal. But the third could befool wise judges. So, the third artist was unanimously adjudged to be the winner of the competition.