Robert Bruce and a Spider 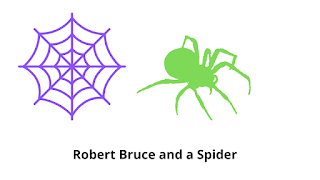 Points: Robert Bruce lost his throne-fought several times to get it back-failed-lay hidden in cave from foes—saw a spider climbing up to the ceiling of the cave-failed several times—the king learnt a lesson-fought and got back his kingdom.

Robert Bruce was a famous king of Scotland. He had a powerful army and with the help of that he built a large kingdom. As usual he had many enemies within the kingdom as well as outside. He had to fight constantly to keep his kingdom intact. Once a powerful enemy attacked his kingdom. His army fought tooth and nail but the opponent was stronger. This time Robert Bruce was defeated and most of his soldiers were killed or imprisoned by the enemy. The king lost his throne and fled away to save his life. He took shelter in a cave in a distant and lonely place. Hidden inside the cave he thought how to regain his lost kingdom. During the day time he remained in the cave and at night he went to distant villages to collect soldiers for his army. Thus he managed to build a small army after a great hardship. Then he attacked the kingdom which was once ruled by himself. But his army was thoroughly defeated and once more he had to take shelter in the cave. Then he tried a few times more but failed to do anything. Then one day he was lying inside the cave in a pensive mood. He was brooding over his fate. Suddenly he spied a spider on the wall of the cave. It was trying to reach the ceiling while making a cobweb in the cave. When it was about to complete its work by chance it fell to the ground. But it did not give up its efforts. Once again it climbed up and was near its goal. But alas ! It once again fell to the ground. It won admiration of the defeated king immediately. Being unsuccessful nine times it succeeded at last. From that minute creature the great king learned that he too might be successful once again if he would try several times. Then he again built a large army bit by bit and attacked the enemy several times. At last he succeeded in regaining his kingdom.

• Moral : Failure is the pillar of success.