King Midas and His Lust for Gold Story Writing | Moral : Too much greed always brings ruin

King Midas and his Lust for Gold 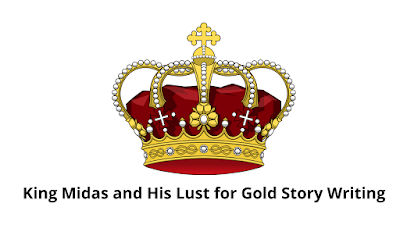 In ancient Greece there reigned a king in a certain kingdom. His name was king Midas. He was a quite prosperous king. He was very famous all over the world for his wealth. Yet he was not satisfied with his riches. He had a tremendous lust for gold. He wanted to possess all the gold on the earth. So, he continually prayed to God to fulfil his ambition. One day God appeared before him and said, “What do you want from me ?'' Midas replied, “Gold is my religion. It is a matter of my worship. I can think nothing but gold. So, you give me a boon." God asked, “What boon do you want ?"' Midas eagerly said, “Give me the boon so that whatever I touch will turn into gold.” Then God smiled and said, “Alright, my son ! From this day whatever you touch will turn into gold.” Saying this God disappeared. King Midas was delighted beyond measurement. He could not think what to do and what to touch first. Then to test the effectiveness of the boon he touched his bed. To his utter amazement he watched his wooden bed to turn into solid pure gold. He started shouting and jumping in joy. Then he touched whatever his eyes fell on. Everything turned into gold one by one. Nothing remained in the room made of anything but gold. Then Midas felt a little tired and thirsty. So, sitting on the golden throne he tried to drink water from the glass. Alas! As soon as he touched the glass the water in it turned into solid gold with the glass. He could not quench his thirst. Being frustrated he wanted to eat the fruits which lay on the table. Again, the fruits became gold as soon as he touched them. Midas' confusion grew more. He became puzzled and quietly sat on the throne. After a few minutes his little daughter who was very dear to him entered the room. Seeing her father on the throne she went to him running for adoration. But no sooner did she sit on his lap than she turned into a statue of gold. Midas could not tolerate that. He realized his blunder. He burst out crying loudly. Then he again prayed to God. reappeared before him and asked, "What do you want now, my son ?" Midas said. “Please take back your boon. I don't want any gold. I want my daughter only." Then God said, “I'm happy that you've realized your mistake soon. Your daughter will regain her life.” With the disappearance of God Midas' daughter turned blood and flesh again and everything in the room became normal again.