Home Story writing A Farmer and his Horse Story Writing | Moral : Prevention is better than cure

A Farmer and his Horse Story Writing | Moral : Prevention is better than cure

A Farmer and his Horse

Points: Carmer noticed the horse's shoes without nails-farmer paid no heed to it—the shoe came off after some time-horse limped-broke his legs—wares broken-farmer lost everything. 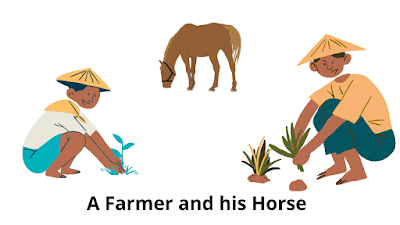 Long, long ago there lived a farmer in a village. He had a small land and ran his livelihood selling the crops produced in the land. He had a horse to help him in all his work. For many years the horse helped him to till the land and carry loads. It got little rest all through the day. The farmer himself was also very hard-working. He always worked from dawn to dusk without taking any rest as he had to maintain a large family. His horse served him without any protest so he was very dear to the farmer. But he had no time to look at his horse as well as himself. One day the farmer had to take a large sack filled with paddy to the market place at a village a few miles away. He placed the sack on the horse-back and suddenly noticed that the shoes of his horse were without nails. But he was in a haste as he had to reach the village in time. So he did not give any importance to the fact and left home with the horse. As the load was heavy the horse was walking slowly from the start. After crossing some distance it started limping. The farmer started pushing it from behind.
But the horse was not in a condition to walk anymore. The farmer found no blacksmith nearby and so forced the horse to walk. After walking a few yards the horse fell down breaking its legs. Consequently the sack of paddy fell into the ditch beside the road. It caused double loss to the farmer who lost his horse as well as his commodity.

• Moral : Prevention is better than cure.