Q: Write a report on a blood donation camp being organised by a club of your locality. 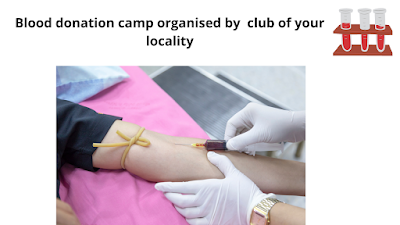 A Blood Donation Camp was organised by the NABARUL SHANGA Club at Chakdaha on 23rd January to commemorate the birthday of Netaji Subhas Chandra Bose. Notice about the camp had been issued in the local newspaper. Banners and posters inviting the people to donate blood were also put up in popular public places in and around the locality. The camp was presided over by Dr. R. N. Dey, the renowned haematologist. A team of doctors worked from 7 a.m. to 6 p.m. to ensure proper testing and the smooth functioning of the camp. The camp proved very successful as people participated enthusiastically. It has proved that people have become aware of the importance of donating blood at intervals so that our hospitals don't run short and patients don't suffer. More than 150 pouches of blood will be given to three local hospitals which are in immediate need of blood.

Tags:
report writing Write a report on a blood donation camp organised by a club of your locality
Share: