The Lion and The Slave story in english | Story Writing Examples

A Lion and a Slave

Points: A slave escapes—he takes shelter in a lion's den—the lion gently holds up a paw to the slave-he pulls out a big thorn-the lion wags his tail—they become friends slave caught-condemned to be thrown into a cage before a lion-lion crawls at his feet and recognises the slave-story heard by the master-becomes merciful-sets the slave free. 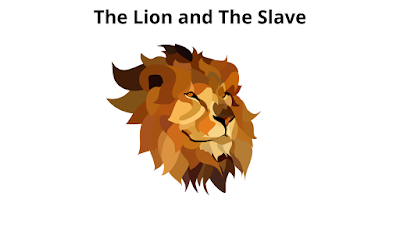 Once upon a time a slave was under confinement of his lord in Greece. His name was Androcles. He was leading a rigorous life with pain and torture. He was thinking of escaping this hardship. Suddenly, one day, opportunity came and the slave became successful in escaping. Coming out of his confinement he unfortunately took shelter in a lion's den in a haste at a far away land. At first, he became enormously terrified looking at the lion. But he was helpless and lost the hope of living anymore. But contrary to Androcles' expectation, suddenly the lion came close to him and gently held up a paw in front of him. The slave noticed that a thorn was stuck to it. He gently pulled out the thorn. The lion got relieved a lot at once. Being glad, the lion wagged its tail as an expression of gratitude. From then on the lion and the slave became friends. After some days the slave was caught by his master. He was put to trial. As a result, he was condemned to be thrown into a cage before a lion to fight till death. Seeing him the lion crawled at his feet because it recognized him to be its benefactor and did not attack him. The master and his men became astonished looking at this event. He wanted to know the reason. At last, he heard the story and his heart became merciful towards the slave. The slave was released at last.

• Moral : Mercy deserves to be merciful.

Tags:
Story writing The Lion and The Slave story in english
Share: