The Cartman And His Wheel Story writing

The Cartman and his Wheel

Points: A cart's wheel sank into mud-bullocks were whipped in vain-cartman prayed to God for assistance-God appeared-advised to put his shoulder to the wheel-cart moved instantly 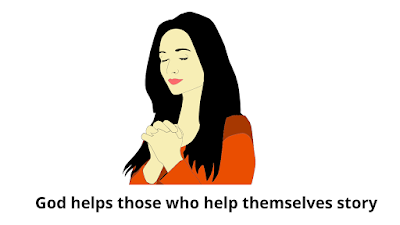 Long, long ago our country was not as it is today. There was no towns or cities. People lived in villages and their main occupation was farming and small business. Roads were muddy. The main mode of transport was bullock carts. They were used to carry humans as well as commodities.

One day such a cart was going along a village road. It was monsoon. So, all the roads were muddy as usual and it was very difficult to drive the carts along such roads. The cart was heavily loaded. So, the bullocks found it very hard to draw the cart. Suddenly one of the wheels of the cart sank deep into mud. The bullocks tried their best to take the cart out of the mud but failed. Then the cartman whipped the animals brutally. They cried in pain and applied all their strength but in vain. Then the helpless cartman prayed to God to rescue him from that situation. Immediately God appeared in front of him. The cartman was delighted to see him and said, "O God ! Please help me.” Then God said, “Why are You sitting on the cart and whipping the innocent animals ? Come down and put your shoulder to the wheel.” Saying that He disappeared.

Then the cartman came down. put his shoulder to the wheel and applied his force. In a short while the cart moved and came out of the mud. The cartman realized his fault and begged pardon to God. He learnt a good lesson from that incident.

• Moral : God helps those who help themselves.