Points: Socrates was a man of calmness-his wife had violent temper-wife abused him one day-Socrates tolerated calmly-sat on the door-step of his house-the furious wife emptied a bucket of water over his head-Socrates laughed and said, "After thunder comes rain." 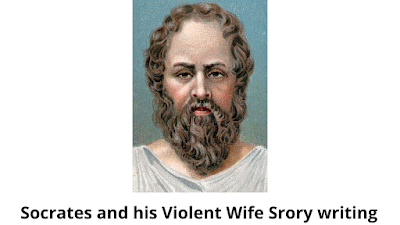 Socrates was a world-famous Greek philosopher. He was a very wise person. He had a lot of admirers all over the world. A lot of young men of the ancient Greece were his followers. He was a man of calm and cool temperament. But unfortunately he was mismatched. His wife was just opposite to him. She was a lady of violent temper. She almost always remained angry with everybody around her. She used to become furious at little mistakes of anybody. She did not let even her husband go after committing any mistake. She often abused him with rough words.

Socrates initially reacted to such insults. But gradually he became habituated to it. So, whenever his wife abused him he tolerated mutely. He used to come out of the room and sit on the door-step after such incidents. One day, he forgot to bring a certain thing from market and for that his wife started abusing him furiously. But Socrates did not say a word and sat on the door-step as usual. In a little time he was engrossed in deep thinking.

Then a funny thing happened. His wife came out with a bucket filled with water and emptied it on his head. But the great philosopher, contrary to the expectation of the on lookers, did not show any excitement. Someone said to him, “Why don't you say anything ?” Socrates smiled and said, “This is quite natural. After thunder comes rain."

A Farmer and his Horse Story Writing