A Girl, with a Can of Milk story writing | Write a short story using the following hints

A Girl, with a Can of Milk 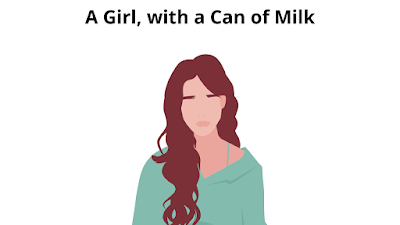 Once upon a time there lived a poor farmer in a remote village of India. He had very little amount of land with which he ran his livelihood in hardship. Not only the farmer but his wife and only young daughter also had to work hard from dawn to dusk. Besides cultivating the land the farmer kept some cows also. He sold the milk in the market and got some money. His daughter helped him in the land but her main duty was to take care of the cows. She fed them, cleaned the cowshed and so on. Also, she had to take the milk to market in a can and sell it. She was hard-working and obedient but she had a flaw too. She often indulged in daydreaming neglecting her duty. Her main dream was to be very rich. One day she was going to market with a can of milk on her head. As usual, she started daydreaming while walking along the road. She imagined that she would be rich by selling the can of milk someday. Then her status would be totally changed and she would be a glamorous girl. Then she would be an object of attention of many handsome young men. She dreams that handsome young men would be eager to marry her and she would proudly reject them. At that time she nodded her head negating such a proposal in her dream. She forgot that she had the can of milk on her head. As a result, the can fell on the ground and all the milk was spoiled. Suddenly she returned to reality. She came back home with a fearful heart. When her father came to know the fact, he beat her badly and forced her to starve for the day. Then she resolved that she would never indulge in daydreaming in future.

• Moral : The result of daydreaming is harmful.