A Famous King and his Wisdom 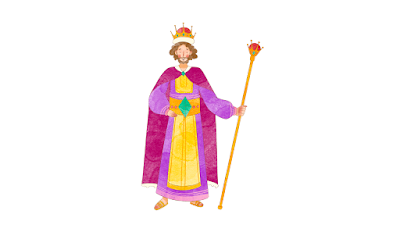 In ancient times there reigned a king in Israel in the Middle East. His name was Solomon. He was very famous for his wisdom. The reputation of his wisdom spread all over the world. It was a matter of discussion among the common people as well as kings and queens of the world. A queen reigned the neighboring country. She was a great admirer of King Solomon. Once she wanted to test Solomon's wisdom which she had heard a lot of.

So, she invited the king to pay his kind visit to her kingdom. The courteous king accepted the invitation cordially and paid a visit to the neighboring country in a few days. When he reached the queen's palace she welcomed him with pomp and grandeur. Then she took the king to the court which was crowded with all the courtiers as well as common people. There were two garlands on a table at the center of the room. The queen said to the king, “My Excellency, I have a request. There are two garlands on that table. One is made of real flowers and the other is made of artificial flowers.

Now, you have to choose the garland made of real flowers.” Hearing the queen's request king Solomon the great smiled. Again the queen said, “But there is a condition. You cannot touch the garlands.” At this, the wise king said, “I am ready to accept your challenge.” Saying that he got up and went straight to the windows which were closed. He opened the windows and came to the table where the garlands were. After some time some bees came flying into the room through the open windows. They sat on the garland of real flowers as they could smell the flowers. Thus they made the job very easy for the king. Once again king Solomon's wisdom was proved to the satisfaction of the queen.

• Moral : Knowledge is the real power