Write a Paragraph on Seasons of Bengal 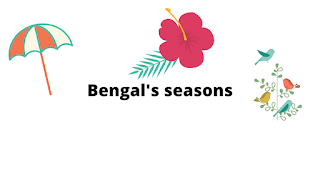 Hindu almanac has divided the whole year into six seasons consisting of two months each, but according to the climatic nature, we can feel the presence of five seasons in Bengal - summer, monsoon, autumn, winter and spring Summer starts from the third week of April and continues upto the end of June. It is the hottest time of the year. Sometimes there are scorching heat waves through Bengal. The people living in towns get relieved by the electric fans and air conditioners but the villagers suffer a lot. Most of the ponds and tanks become dry. People usually remain indoors in the noon hours. Schools and colleges remain closed. The only bright face of the season is its fruitfulness. Mangoes, lichies, jackfruits and black-berries become available in this season. Bengal faces occasional storm which is generally known as Norwester or Kalbaisakhi which destroys many huts and crops. Rainy season extends from the end of June to the end of August. It rains a lot due to the effect of southwestern monsoon wind.

Tanks, ponds and canals get filled up with water to the brim. Floods often hit a large area in West Bengal by the effect of which many people, cattle suffer. Floods also wash away refuse matters and remove the germs of many diseases. The principal crops of Bengal - paddy and jute are grown in this season. Autumn comprises the months of September and October. The sky remains clear and the whole nature is decorated with many flowers like kash, which reminds us of the coming Durga Puja, the main festival of the Bengalees. Autumn is considered as the season of paddy harvestation. Schools, colleges and offices remain closed for long days. Winter begins in November and lasts till the middle of February. It is the cold months of the year which is comfortable for the rich but trying to the poor. We get adequate supply of fresh vegetables and fishes in this season. The last season spring extends from the middle of February to the second week of April. It is the season of greenery and flowers. We become spellbound seeing the dazzling beauty of Krisnachura and Radhachura. In keeping with this colourfulness of nature we observe Holi on the eve of Dolpurnima.