Write a paragraph on the Evil of Dowry system 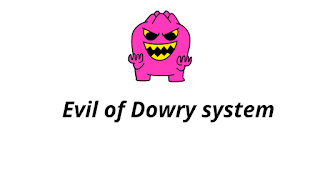 Among the most dangerous social evils dowry system can be ranked the highest. Though the system had been criticized through the ages, it is still in custom in our society. It is not only a social evil but it has degraded the womanhood in India. Dowry system, though a long-time practice, comes possibly for the intention of keeping the newly wed couple in happiness ultimately soon becomes the cause of their unhappiness. It has become a medium of transaction between two families and the marriage has become the treaty behind this transaction. It is amazing that a well educated family does not hesitate to demand money and commodity from the helpless parents of the bride. But more often the well-established do not mind anything when they get handsome amounts of money and numbers of sophisticated consumer goods. It has now become a status-symbol. For most of the middle and lower-middle class families system of dowry has become a curse. They, in most cases, become unable to | meet the demand for cash, ornaments, refrigerators, TVs, cars and even residential flats as dowry. As a result, the conjugal life, which was once full of happy dreams and expectations, falls prey to this evil system. Ultimately, the bride has to choose the way of self-annihilation. The evil of dowry and bride torturing has drawn much disgrace to our country. Foreigners often ridicule at us for this. Our Government has already implemented laws against this evil system. But laws are not enough to uproot this social evil. A total change of the outlook of the society is necessary. Women are to be recognized as equal partner of men. They have equal roles to play to build up a healthier social-structure. They should be provided with equal honour and dignity in this country of 'Sati', 'Sabitri', 'Behula' and 'Sita'.