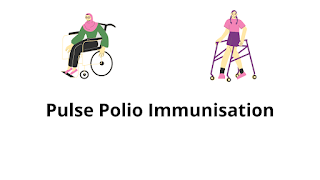 The disease which was once a matter of grave concern was Poliomyelities, throughout the world. It is mainly caused by a virus. In research, it has been proved that by attack of this virus the inflammation of the grey matter occurs. It often results in the disablement of the limbs. In most cases children are the victims of this disease. So, it was formerly called “infantile paralysis'. The limbs which have been attacked by this virus become thin and bent. It results in permanent disability. To wipe out this dangerous disease from this world The World Health Organization (WHO) has given certain instructions which are to be strictly followed by the parents of the children. In every nation all the children must be given polio drops or Oral Polio Vaccine at the time of birth or regularly at the certain interval of few weeks. As a result, this will enable the children to be immune against the attack of this dangerous disease. As a part of this programme, every country under the supervision of UNICEF organizes Pulse Polio programme every year. Constant watch is kept over the programme so that the spread of this disease might be checked. In our country, since 1995-96 a Pulse Polio programme has been being organized at an interval of six weeks in which the children below five years are given this vaccine. The purpose of this programme is to eradicate this disease from the medical map of our country. But it is unfortunate that 66% of the total polio victims in whole world are Indians. It may be the cause of the negligence of the parents of these children. It is very shameful to us that even in this age there has been false notion or superstition against this disease among some people in our country. But we must fight against this disease to make our future India healthy and hearty.