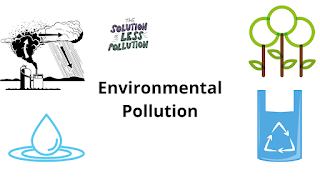 So many definitions of environmental pollution are in a convention that it is very difficult, to sum up in a few words or lines, what pollution is. It may be rather Lid that any abnormal change in chemical, physical, and biological characteristics of the environment is called pollution. Nature is self-sustaining and always tries to maintain balance among its components. Any kind of imbalance therein causes a chain reaction that ultimately leads to environmental pollution. Man is now only trying to develop himself as well as his civilization and the consequence of which results in environmental pollution.

Today air has become foul; water is no longer safe and forests are being cut down. Environmental pollution may be considered the direct consequence of industrial progression. In the industrial belt, the air gets polluted by the emission from automobiles and exhausts from factories. The large-scale accumulation of carbon dioxide is somewhat threatening to us. Green forests purify the air as they inhale carbon dioxide and exhale oxygen. But we ourselves have been cutting down the trees for our greed keeping in mind only the urbanization and industrialization. The sewage from the municipal corporation and industrial plants has added a large amount of poison to the freshwater of rivers and seas.

As a result, the total balance of the ecosystem in water bodies gets hampered. The species living underwater have now become subject to be extinct. Emissions from oil refineries float on seas destroying marine lives and coastal vegetation. Modern civilization is now facing another great problem of food pollution. Reckless use of chemical fertilizers, pesticides, and insecticides pollutes the plants, vegetables, and other agricultural products we consume. Noise pollution must be added to this list also. The sound emitting from automobiles, factories, bursting of crackers tell upon our mental as well as nervous balance. We often face acute headaches and nervous tension listening to these unhealthy types of sounds. It becomes tremendously dangerous to patients suffering from heart diseases and hypertension.

Another, perhaps the latest type of pollution is the pollution caused by a nuclear explosion and pollution resulting from radioactive wastes. The only remedy to save our being is to end pollution and many measures have been taken to check this environmental pollutions. The United Nations observe World Environment Day every year on June 5, to develop a kind of consciousness against this danger throughout the world. Many countries have enacted laws and formed Pollution Control Boards to check the environmental pollution. But nothing is sufficient unless a kind of awareness against pollution is to be developed among the people for their own sake. So, we must take every step to save this planet from environmental pollution and make this earth worth living on for generations to come.