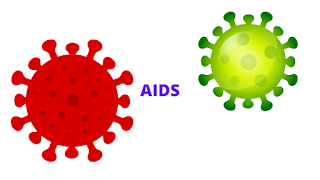 AIDS a Threat to Life

HIV (Human Immunodeficiency Virus) infection and AIDS (Acquired Immuno Deficiency Syndrome) are related. It is a disease of the human immune system caused by infection. It is a fatal disease. Number of HIV/AIDS victims is growing day by day.

During initial infection, a person may have a short period of influenza or influenza-like illness. This short period of illness is followed by a long or prolonged period without symptoms. As the illness progresses it damages the immune system more and more and gradually the victim becomes vulnerable. AIDS can be acquired or transmitted by three main routes : sexual contact, exposure to infected body fluids or tissues and from mother to child during pregnancy, child birth or breast feeding. There is no risk of acquiring HIV if exposed to faeces, nasal secretions, saliva, sputum, sweat, tears, urine or vomit unless these are contaminated with blood.

HIV/AIDS is a great threat to life because once a man is affected it is almost sure that he is going to die. Sometimes it takes long ten years for a man to know that he is a HIV/AIDS patient because it grows very slowly and secretly before it is exposed and when there is almost nothing left for anyone to cure him up. In the absence of any specific treatment and prevalent ignorance about the fatality of the disease the number of HIV/AIDS affected people are growing day by day. The symptoms of the disease are not always discernible. The most common sign of the disease is recurring respiratory tract infection.

The solution of the disease lies mostly in the hands of the victim before he has become a victim. He can control himself so far as sexual contact is concerned. Other than this a man must consult immediately with a medical practitioner if he suffers from any kind of ailment but unfortunately in a country like ours people are most callous and indifferent to his health and hygiene and this may be due to ignorance and poverty.

We may get fruitful result in getting people aware of the curse of HIV/AIDS by organising Health Camps in different places down at block levels or even village levels and involving more and more people including students, young and old people and women. They should be enlightened with fatal nature of the disease and the precaution and step they should take for a healthier and longer life.