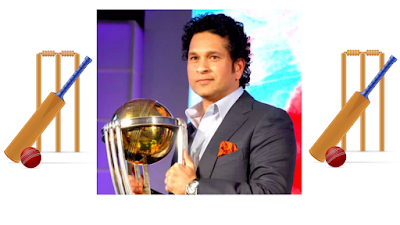 Sachin Ramesh Tendulkar is perhaps the most complete batsman and the most worshipped cricketer in the world today. Tendulkar holds just about every batting record worth owning in the game of cricket - including those for scoring the most runs and hundreds in Tests and ODIs. Sachin Tendulkar has been one of the most prolific run-makers of all time (with Sir Don Bradman ahead of him), and arguably is the biggest icon the game of cricket has ever known. His batting was a combination of the purest principles – perfect balance and technique, precision in stroke-playing.

Born on 24 April 1973, Tendulkar took up cricket at the age of eleven under Ramakant Achrekar, a famous cricket coach. Later, he made his test debut against Pakistan at the age of sixteen, and went on to represent Mumbai domestically and India internationally for almost 24 years. He is the only player to have scored 100 international centuries, the first batsman to score a double century in a One day international game, and the only player to complete more than 30,000 runs in international cricket. In October 2013, he became the 16th player and first Indian to aggregate 50,000 runs in all recognised format of cricket.

Tendulkar has been awarded a great number of honours – the Arjuna Award in 1994 for incredible sporting achievement, the Rajiv Gandhi Khel Ratna Award in 1997, Padma Shri in 1999 and Padma Vibhushan in 2008 to name a few. Moreover, within a few hours of playing the final match of his cricketing career in 2013, the Prime Minister's office announced that Tendulkar will be awarded the Bharat Ratna, making him the youngest recipient till date and the first ever sportsperson to receive the highest civilian award of the country. In 2012, Tendulkar was nominated to Rajya Sabha. He was also the first sports-person (and the first without an aviation background) to be awarded the honorary rank of Group captain by the Indian Air Force.

In December 2012, Tendulkar announced his retirement from ODIs. He retired from Twenty-20 cricket in October 2013 and subsequently announced that after playing his 200th test match against West Indies on 16 November 2013 in Mumbai's Wankhede Stadium, he would retire from all forms of cricket. Popularly known as the "little master”, Tendulkar played 664 international cricket matches in total, scoring 34,357 runs.

Tendulkar's considerable achievements seem greater still when viewed in the light of the burden of expectations he had to bear. The aura of the "god of cricket" may have dimmed slightly, as the years on the international circuit took their toll on the body, but Tendulkar remains, by far, the most worshipped cricketer in the world.