Paragraph on Students and Politics 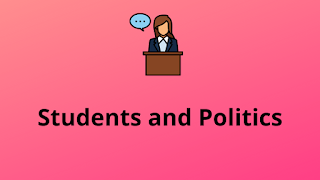 Hints: Jeed of political consciousness in a democracy-students' primary duty-active politics to be avoided by the students-knowledge of socio-political condition and economic programmes of the country.

The most important span of a man's life is student life. He is the backbone of the country as well as future citizens. The habits and qualities a student acquires from the training he receives determines the future life of the student. Prosperity of a man in the world will come only through knowledge and the virtue of strength of mind and character. But if he does not pay heed to these primary duties and indulges in activities which are undesirable, then he will surely indulge in dark future. One of such undesirable activities of a student is to actively take part in politics as a politician. Definitely it is desirable for a college student to have a good knowledge in politics and also discussion about politics with their classmates, teachers and other elders. But it is not desirable at all for a college student to take active part in politics as nowadays politics is a dirty game being played by the politicians and may hamper studies. The students' career may be ruinous if they take active part in politics other than studies as existing herein. Students are almost very immature and therefore they cannot discern properly what is good and what is bad for them. They are easily excited and led by emotion and passion other than viewing second time. Some of the political leaders try to exploit the students for their own selfish needs and requirements. They weaken the educational environment and academic atmosphere in the schools and the colleges, through introducing the active politics by building up student fronts to achieve their narrow political gains. Strikes are often called by the students simply on an excuse affecting the day to day classes because of intervention of a dirty game of politics by the politicians from behind. Of late we have had an impression of indiscipline, lack of intellect and decay of moral standard among the major part of students because of such political party feelings. The most sorrowful part of this state may be accountable to the role played by our political leaders indulged in this dirty game. Such situation may get changed to better and also the students may step up to their normal responsibilities and duties if the dirty self-interested politicians are totally kept aloof from the students' front.