Paragraph on Science and Superstition 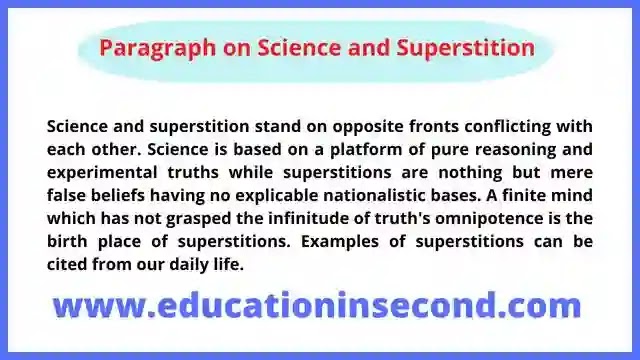 Science and superstition stand on opposite fronts conflicting with each other. Science is based on a platform of pure reasoning and experimental truths while superstitions are nothing but mere false beliefs having no explicable nationalistic bases. A finite mind which has not grasped the infinitude of truth's omnipotence is the birth place of superstitions. Examples of superstitions can be cited from our daily life. We have seen how a car stops as a black cat crosses the road and people avoid to walk under a ladder. It is considered ominous if a person sneezes when some one is going out for a work and sitting of thirteen in one table is believed to bring ill-fate.

Scientific reasonings for these are not possible as these are only beliefs coming down generations after generations from the time we had been forest-dweller. Science, on the other hand disregards these and only considers those with a proof. In this age of modern science it is still buildering to see how superstitions linger on. This is because complete eradication of these have not been possible yet ; they still lurk in human minds.