Paragraph on Global Warming in 150 words 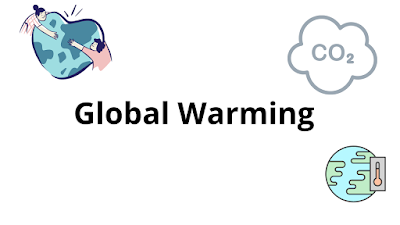 Global warming is a great threat to the environment as well as to all living beings on earth. The word 'global comes from the word 'globe' meaning ‘earth' and the word 'warming meaning 'heating up'. Therefore global warming is the average increase in the temperature of the earth day by day. This is due to the increase of greenhouse gases like carbon dioxide and methane that are present in the atmosphere. These greenhouse gases prevent the heat from escaping from the earth. This is commonly known as the greenhouse effect, which is the main cause of global warming. Carbon dioxide in the air is increasing due to the increase of industries in the urban as well as in the rural areas. Motor vehicles emitting carbon dioxide and carbon monoxide gases also lead to global warming.

Deforestation which increases the amount of carbon dioxide is another vital cause of the increase in temperature of the earth. Holes are formed in the ozone layers and so the total amount of ozone gas in the atmosphere is reduced. The ozone layer helps to protect the earth from the ultra-violet rays of the sun. Due to the increase in temperature of the earth, the huge mass of ice which is found in the North and the South Pole has started melting, increasing the level of water both in the oceans and seas. Many islands and coastal areas will be inundated due to the melting of snow caused by the increase in the temperature of the whole world. The towns and cities that have grown up on the banks of the rivers will be underwater in the next few years.

The Gangotri Glacier which is the source of the river Ganga has already started melting. So it is a great threat to the people living in the towns and cities situated on the banks of the river Ganga for the water level will rise by several meters, within fifty years from now. The whole world must come forward to check the emission of carbon dioxide and carbon monoxide gas from automobiles and factories. Afforestation is another way to combat against this vital global disaster, for trees absorb carbon dioxide from the atmosphere. Necessary steps must be taken to protect the ozone layer to fight against this crucial disaster.