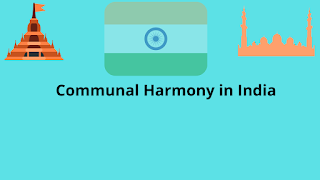 The British failed to accept that India was a nation. So they wanted to divide India according to their religion. The seeds of communal tensions and riots among the different religious sects were sown by the Britishers by the implementation of the Divide and Rule Policy. The Indian national leaders were very careful in establishing India as a secular state. But the Britishers generated communalism in India. Consequently they invoked hatred and quarrel between two principal religious sects. Though it has been explicitly stated that India is a secular country where people respect all religions, there are communal riots on such sensitive issues in the last few decades like the communal riots on Ayodhya Babri Masjid issue. India had to suffer a lot due to this communal violence through the loss of life and property. But we should realise that communalism should have no place in modern India. It is the duty of every Indian citizen to promote peace and brotherly feeling among all other citizens belonging to different communities and speaking different languages. But communal disharmony and bloodshed arises even from a minor and apparently harmless event. Indian culture respects other faiths and beliefs and has the inner strength of broadmindedness. The differences in the religions lie only in the expressions and observance of its rituals. With the progress of science, recently we have developed a secular outlook on life and hence established a harmony among different communities. We are on guard against any kind of religious frenzy that may undermine communal harmony. Therefore, it is imperative to cultivate a scientific and ethical approach to our social, economic and political problems so as to establish communal harmony and maintain peace in our country for smooth progress ahead. The evil forces that are trying to destroy communal harmony should be completely crushed.