Home Story writing STORY WRITING ON THE FOX AND THE CRANE

STORY WRITING ON THE FOX AND THE CRANE 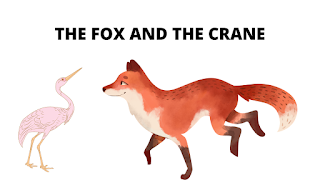 THE FOX AND THE CRANE

Once a fox  wanted to amuse herself and laugh at a crane. She invited the crane to have dinner with her the next day. The crane thanked her for her invitation and accepted it.

The next evening the crane went to the house of the fox. He was cordially received by the fox. There was only one item on the menu—a soup served in a shallow dish. The fox made a good meal of the soup and lapped it quite easily. But the crane, with his long narrow beak, could not sip any of it. He could suck only a few drops of it. The crane remained hungry and got angry but he was too polite to say anything to the fox. Before going away he thanked the fox and said, “Please come to my house tomorrow to have dinner with me”.

The fox readily accepted the invitation. The next day, the fox came to the crane's house and the feast began. Now it was the crane's turn to make sport of his cunning guest. The crane prepared a delicious stew and served it in a long vessel with a narrow neck. The crane easily drank it up from the vessel with his long beak while the fox could not eat it. She had only to keep looking

and to go back hungry. The crane thought to himself, “Now I've served her right”.

Moral : Do not do others what you would not like others to do to you. Or Tit for tat.