Story writing on THE CLEVER KING AND HIS DISHONEST SUBJECTS

Q: Subjects complain against the King's dishonesty-the King plans a milk pond in the capital-workers dig up a big pond-each subject is ordered to pour a jar of milk at night the chosen day arrives-everyone pours a jar of water-thinks his one jar of water would make no difference-pond of water-King proves his point. 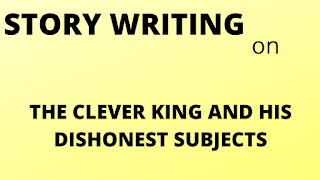 THE CLEVER KING AND HIS DISHONEST SUBJECTS

Once there lived a king in a country. There was a discontent among his subjects that the king was very dishonest and corrupt. They used to complain against the king's dishonesty. The king was exasperated and as a clever ruler he planned to prove that in reality his subjects were dishonest. So he made an announcement that he wanted to have a pond full of milk. A pond was dug up in the middle of the capital. Each subject was ordered to pour a jar of milk into the dug-up hollow at night. The subjects were dishonest to the core. Everyone thought that a jar of water would make no difference into the milk pond since others were pouring down milk. So everyone poured a jar of water in the darkness of the night. The pond was found to be full to the brim with nothing but pure and unmixed water. Proving his point, the clever king made a proclamation that no dishonest man should talk about others' honesty.