Write in about 150 words a paragraph on Sir Donald Bradman, the greatest cricketer of the century, on the basis of the points given below :

Hints: Born in New South Wales (August 27,1908)—first appeared against New South Wales, Scored a century (118)—highest innings in Australia : 452 not out against South Australia in 1927/28— started career as a leading cricketer, captained Australia in 1936—national selector in 1958– the only Australian cricketer to be knighted—published autobiography, ‘Farewell to Cricket In 1950—became chairman of Australian Cricket Board in 1960—scored 29 centuries, 13 half centuries, 6996 runs and average, 99.94 in Test Cricket—died Feb. 2001. 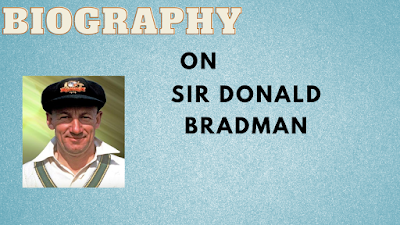 Sir Donald Bradman is the greatest test cricketer of the bygone century. He was born in New South Wales of Australia on 27th August, 1908. He made his debut in the first class cricket against New South Wales and he scored a century (118) in the match. During 1927-28 Bradman scored 452 not out against South Australia and it is so far the highest innings scored by an individual in Australia.

Thereafter Bradman started his career as a leading test cricketer and became the captain of Australia in 1936. He made an unsurpassable record of making an average of 99.94 runs in Test cricket. His other records of making 29 centuries, 13 half centuries and 6996 runs are landmarks in the history of Test cricket though subsequently these records have been broken. After his retirement from Cricket Bradman became a national selector in 1958 and later in 1960 he became the chairman of Australian Cricket Board. In 1950 he published his autobiography ‘Farewell to Cricket'. Sir Donald was the only Australian cricketer to be conferred with Knighthood. This wizard of batting and a legend passed away in February, 2001.