Study the following information about Kalpana Chawla, the American astronaut of Indian origin who lost her life when the space shuttle Columbia broke down. Write a paragraph on her life and achievement.

University of Colorado. Career: (i) joined NASA (National Aeronautics and Space Administration) (ii) selected astronaut -1994. (iii) Maiden space flight -1997 (with five other astronauts) Death: 16th Jan, 2003, Spaceship Columbia with Kalpana as one of the a crew-member crashed over Texas fifteen minutes before landing. 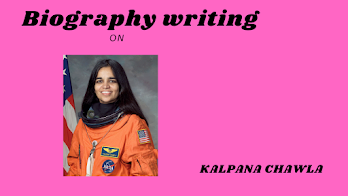 Kalpana Chawla, an Indian by birth, was the first Indian woman to travel into space. She was born in 1961 at Karnal, Punjab to Banarasi Lal, a businessman and Sanyogita, a housewife. She had her early schooling at Tagore Bal Niketan at her native place. After obtaining a degree in Aeronautical Engineering from Punjab Engineering College, she completed her Masters degree from University of Texas in 1984. Later she got a doctorate degree from University of Colorado.

Kalpana joined NASA and made her maiden space flight in 1997 with five other astronauts. But life had ordained something different for this bright woman. Unfortunately for India, on 16th January, 2003 the spaceship Columbia, in which Kalpana was travelling with other crew-members crashed over Texas fifteen minutes before landing. Thus the life of a great woman of promise was cut short untimely. But her name and achievement would inspire Indian women for years to come.