Write A Short Biography Of Swami Vivekananda In About 200 words

College : Presidency and General Assembly Institution—passed B. A. in 1884

Met : Sri Ramkrishna, 1882 Later on : his disciple Known as : Swami Vivekananda, Participating in the World Religious Conference—The World's Parliament of Religion started on Sept 1, 1893 at Chicago : Foundation of Ramakrishna Mission in May, 1897 and Belur Math in December, 1898.

Remarks:  “Many years will pass, many generations will come and go, Vivekananda and his time will become the distant past, but never will fade the memory of the man who all his life dreamed a better future for people.”—Chelyshev 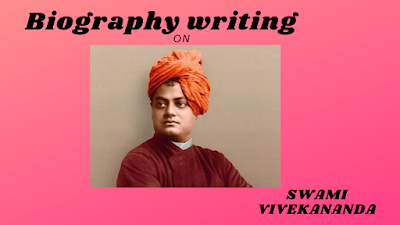 Twelfth January 1863 saw the birth of a new star on the religious horizon of India, nay of the world. On this day pious Biswanath Dutta, an Attorney of Calcutta Hight Court, and Bhubaneswari Devi were blessed with a son whom they fondly called Bile. His real name was Narendranath. Bile was a naughty and restless child. He began his early education at home and had his schooling in Metropolitan School. He passed the Matriculation Examination in 1879. He completed his college education at Presidency College and General Assembly Institution. After his graduation in 1884, Narendranath met Sri Ramkrishna in 1882 and the meeting initiated a turning point in his life. Later he became the disciple of the prophet and came to be known as Swami Vivekananda.

The World Parliament of Religion started on Sept. 1, 1893, in Chicago and Swamiji participated in the World Religious Conference and came back winning laurels for India. Through his historic speech, the Hindu monk conveyed the eternal messages of 'Help and not Fight, “Assimilation and not Destruction' ‘Harmony and Peace and not Dissension. He founded Ramakrishna Mission in May 1987 and the Belur Math in December 1898. Swamiji left his mortal frame on 4th July 1902 at the age of 39 but his eternal messages will serve as a beacon for generations to come.